On this route you will see:

This route gives you one of the best impressions of the diversity of the Baltic States.

On the one hand there are different landscapes: Not only the Baltic sea shore but also lakes and rivers in the backyard. Not only the big cities of Riga and Liepaja but also small towns like Kuldiga which give you an impression on how life looked in the Duchy of Couronia.

Pictures of this region

LT5. Northern part. Between Klaipeda and the Latvian border

Palanga The most interesting cultural heritage – the park, projected by Rene Andre. This park is very good example of ...
Read More

Here are some texts that concern the route between Šilūte and Klaipėda and/or Nida (the Curonian Spit) Ventė horn – ...
Read More

Route description Riga-Klaipeda (from 2001, to be edited and updated)

[LV1] Riga-Klaipeda On this route you will see: This route gives you one of the best impressions of the diversity ...
Read More

Breathtaking views of the colossal sand dunes on the Curonian Spit – one of the treasures of UNESCO‘s World Heritage ...
Read More

EuroVelo No. 13 The Iron Curtain Trail  experiencing the history of Europe’s division For almost half a century, Europe was forcibly ...
Read More

​Surely this route gives you one of the best impressions of the diversity of the Baltic States.

on the one hand there are different landscapes: Not only the Baltic sea shore but also lakes and rivers in the backyard. Not only the big cities of Riga and Liepaja but also small towns like Kuldiga which give you an impression on how life looked in the Duchy of Couronia.

for a good leisure travel the route between Klaipeda and Riga takes about one week. The tourism infrastructure is quite well developed – but only at some sea side spas you might feel annoyed…

Which roads not to take!

Here are the reasons against it: 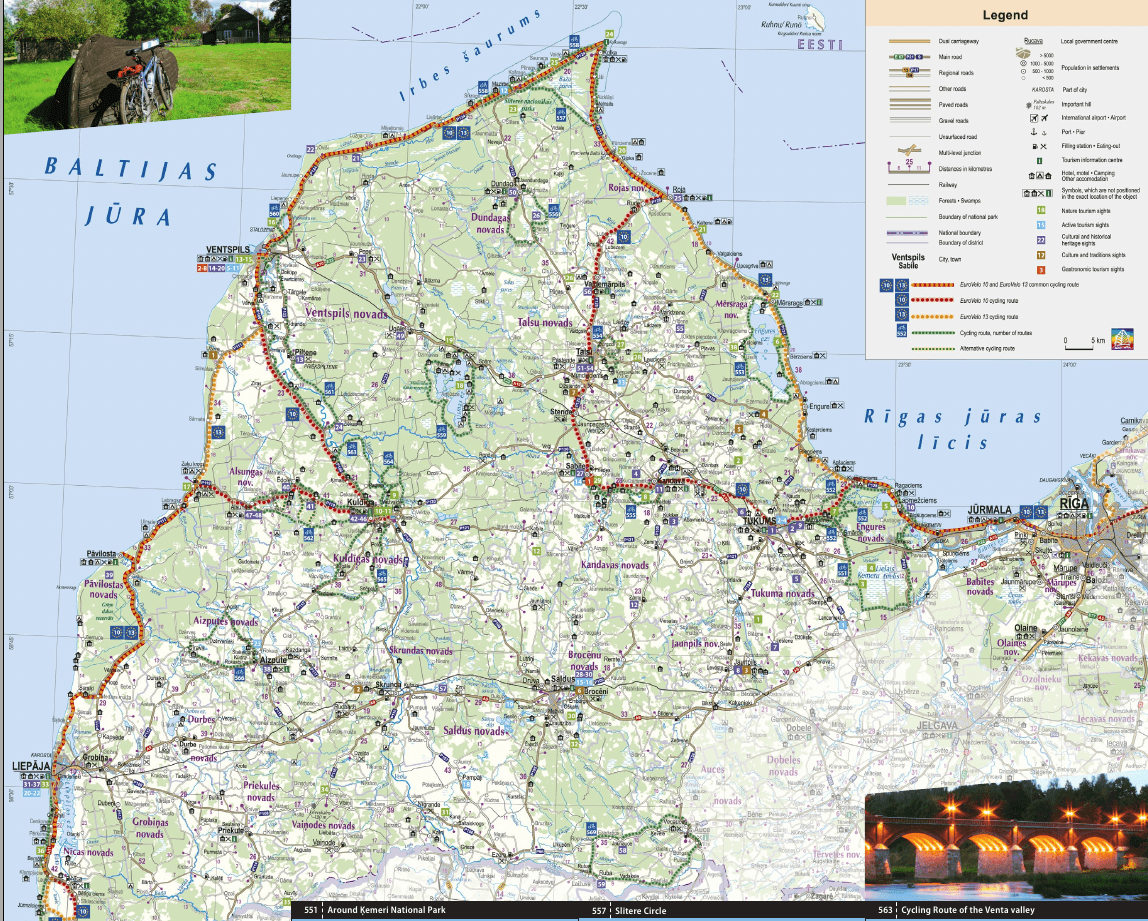 Kurzeme is located in the Western part of Latvia, bordering with Lithuania in the South.
Kurzeme is best described by the 390 km long versatile coastline of the Baltic Sea and Riga Bay – steep coasts, stony seaside, protected dunes, but aboveall – sandy beaches.
Kurzeme is rich in cultural and historical heritage – castles and manors, old towns,seaside fishermen villages and ethnographic regions with ancient cultural traditions,that differentiates Kurzeme from any other region in Latvia. Kurzeme also has more than
80 especially protected nature territories with a distinguished variety of species, natural habitats and landscapes, as well as aesthetical, ecological,cultural and historical values.
The national list of Latvia in UNESCO World Heritage List includes the old town of Kuldīga in the ancient valley of the Venta River and the archaeological ensemble of Grobiņa. The cultural space of the ethnographic Suitiregion is inscribed on UNESCO’s List
of Intangible Cultural Heritage in Need of Urgent Safeguarding.
Kurzeme is crossed by cycling routes EuroVelo 10 “Around the Baltic Sea” and EuroVelo 13 “The Iron Curtain”. Both EuroVelo routes are an excellent way of getting to know Kurzeme, its natural treasures, cultural and historical heritage, people and their
lives today.

10
EuroVelo 10 “Around the Baltic Sea”
With 490 km in Kurzeme, the route both runs along the coast, stopping in the largest harbour cities – Liepāja and Ventspils, and moves away from the sea leading to the historical small towns of Kurzeme – Kuldīga, Talsi, Sabile, Kandava, Tukums, introducing to the cultural environment and the traditional landscape of Kurzeme – hills, forests, and river valleys.

13
EuroVelo 13 “The Iron Curtain”
This EuroVelo 13 route takes you around Kurzeme along the coast – for almost 390 km.
This route will come as a dessert to those interested in the military heritage – here you can see the former military radio telescope of the USSR army in Irbene, which is theeighth largest in the world, and is now being used for civil purposes. Karosta (Naval Port) in Liepāja also has a lot to offer – a unique complex of military and fortification buildings on the coast of the Baltic Sea. The nearby sea has left a great deal of influence on Kurzeme. Seaside fishermen villages in Kurzeme have a very special atmosphere, and here, as in any proper fishermen village, smoked fish is always on the offer.
If you are planning a longer cycling holiday EuoVelo routes can be supplemented with longer or shorter local cycling routes. The map includes the most important cycling rou- tes that show the most of the nature, as well as the cultural and historical heritage of Kurzeme.
There are several outstanding cycling routes in Kurzeme that have been set up in pro tected nature territories. Routes in Slītere National Park, Ķemeri National Park, nature parks “Bernāti”, “Pape”, “Engures ezers”, and reserve “Būšnieku ezers” run across both the pine forests and dunes so typical to the coastal area, as well as take you on a tour through serene fishermen villages. Routes in nature parks “Talsu pauguraine”, “Abavas senleja”, “Embūte”, “Riežupe”, and in nature reserve “Ventas ieleja” run across hilly areas and picturesque river valleys.

Cycling route enthusiasts in Kurzeme will enjoy supplementing their tours with rides
around lakes –Lake Usma, Lake Pape, Lake Engure, and Būšnieku Lake.
Several cycling routes lead you on a journey through the cultural environment, ethno-
graphic regions, aswell asthe cultural and historical heritage of Kurzeme, one of which is
“Suiti and theSmall Towns of Lower Kurzeme”cycling route. Nearly all towns have several
local cycling routes as well, that connect interestinghistorical and modern tourism sights
– castles and manors, museums, open farms, recreational parks.
Enjoy Kurzeme by tasting smoked fish, sklandrausis (carrot cake), live beer or home
made wines, and many other local delicacies!

There is no official bicycle route signing in Latvia, yet. __this is the proposed bicycle route for the EuroVelo? Route No. 10 “Baltic Sea Circuit” (www.eurovelo.org) and the Euro Cycle Trail R1 Calais-St?. Petersburg (www.euroroute-r1.de)

Oder Infopaket zur Route / or as information package to the route